The last selections are from the works of John Sebastian Bach, the greatest contrapuntal composer of all times and all countries, and by the aide of Handel the greatest composer of the 18th century. He was born at Eisenach, Germany, on the 21st of March, 1635, and died at Leipzig on the 28th of July, 1750, being at the time of his death director of the Thomas school and cantor of the two principal churches of that city. Towards the latter part of his life he was so unfortunate as to lose his-eyesight. 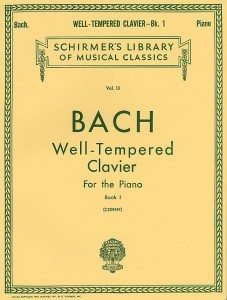 Bach is without an exception the noblest and purest composer of fugues. His greatest works are his Passion music, according to St. Mathew, and his Mass in B-minor. He left an enormous quantity of vocal and instrumental music.

The Well Tempered Clavier by Bach

Among his numerous works there is none of greater interest to the student than his “Well Tempered Clavier,” containing forty-eight Preludes and Fugues. Schumann said in his famous Rules and Maxims, “The Well Tempered Clavier” should be your daily bread.

You will then certainly become an able musician.” In another place he said, “Practice industriously the fugues of good masters, above all those by John Sebastian Bach.” Doubtless all great masters, pianists as well as composers, have studied his works diligently. So great was their appreciation of Bach that Mozart said, “By the side of him, we are all boys.”

The term fugue is derived from the Latin word Fuga, to chase or to flee, and has been applied to this style of composition. Because the several parts seem to flee from each other, fugues usually are written for two, three, four and live voices.
Every fugue has a well-defined theme or subject, in art language known as Dux, which is skillfully worked out according to the strictest rules. In order to obtain a correct view of the several parts, the student should mark them, or what would be a still more effectual plan, he should write an entire fugue out on a score, giving each voice or part a separate line.

Invention and Fughetta for two parts by Bach

A Fughetta is a small fugue. Practice these pieces slowly, study the different parts carefully, and cause them to come in with precision and clearness. All fugues should be played with a moderate degree of speed, for in that manner only will the composition become clear to the player and listener. Fast playing leads to indistinctness and confusion. Play these and similar works continuously and their beauty will become plain to you. Yes, in the course of time yon will be charmed with this style of composition.